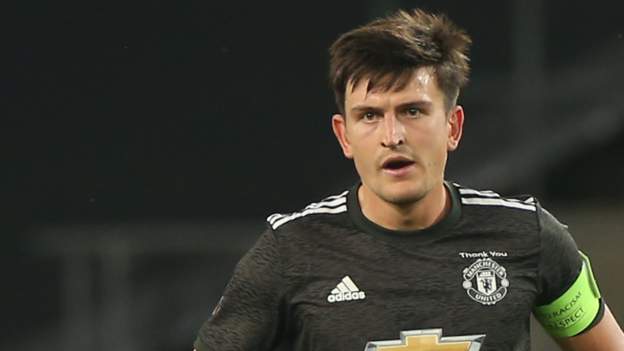 For the first time, England had two men sent off as they succumbed to a 0-1 defeat to Denmark in a Group A2 clash at the Wembley on Wednesday night.

Christian Eriksen celebrated his 100th appearance for his country by converting the lone penalty and winner.

Denmark fielded the same side that beat Iceland last weekend and started the proceedings on a bright note with Kasper Dolberg creating a couple of half-chances.

England were just beginning to find space down the right flank through Mason Mount and Reece James when Harry Maguire’s expulsion in the 32nd minute changed the complexion of the game.

The Manchester United captain shown a yellow card for a reckless challenge on Yussuf Poulsen in the 5th minute was eventually red-carded by Spanish referee Jesus Manzano after he brought down Kasper Dolberg while trying to retrieve his own poor touch.

With the Three Lions trying to recover from the shock of Maguire’s expulsion, Kyle Walker was penalized for a foul on midfielder Thomas Delaney inside the box and a penalty was awarded.

Without any VAR available the decision seemed harsh for it looked like Delaney went down even as Kyle Walker made the challenge on him.

The English were able to keep up their attacking flair even after being down to 10 men. Gareth Southgate’s men had their best chance just a little after half-time.

Declan Rice headed ball into the area was brilliantly connected by Mason Mount with his head from close range and what looked like a certain goal was spectacularly clawed out by Kasper Schmeichel.

The Danes enjoyed most of the possession post the interval but were unable to add to their lone first-half goal.

Daniel Wass took advantage of some callous flat-footed marking by Walker but the Danish defender’s header sailed over.

England still had a chance to equalize in stoppage time but Harry Kane’s goalbound header was cleared superbly off the line by  Simon Kjaer as the Danes hung on to their solitary goal lead.

Chelsea’s James who arguably looked England’s best player on his full debut ruined all the good work he had done when he got into a verbal duel after the final whistle with referee Manzano and was shown a red card.

As for MacGuire, he looked like someone not being able to mentally come out of his recent arrest in Greece and it wouldn’t surprise United watchers if he were to be asked to cool his heels a bit at the club level given his recent poor form.

Thursday’s loss at the Wembley was only England’s third at the home in their last 50 competitive internationals on English soil and it also suddenly leaves them in an uncomfortable third spot behind table toppers Belgium and Denmark.