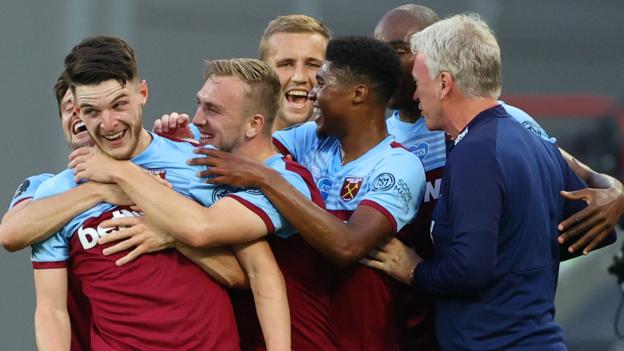 Tottenham Hotspur threw away an early three-goal lead to be held 3-3 by West Ham at home last Sunday evening.

In an astonishing comeback, David Moyes’ Hammers recovered from being three goals down to salvage a point from the final 12 minutes of the game.

Spurs seemed to have wrapped up the match in the first quarter of an hour with a three-goal lead. Heung-Min Son opened for the hosts with barely 45 minutes of the game gone from a stunning Harry kane pass.

Son and Kane were again involved in some deft interplay as they nutmegged center-back Angelo Ogbonna before the latter wrong-footed Lukasz Fabianski for the second goal of the night in the 8th minute.

Jose Mourinho’s side coming out of a 6-1 thrashing of Manchester United looked irresistible as Kane doubled his tally and earned his side’s third goal when he headed in from Sergio Reguilon’s back-post cross.

The Hammers were in with a chance to reduce the deficit but Kane played able defender when he effectively blocked Vladimir Coufal’s goalbound shot a little before half time.

West Ham should have reduced the deficit a little after but Pedro Fornals close range header sailed over the bar with an empty net at his mercy.

Spurs slackened off a bit after the interval, introducing star returnee Gareth Bale in the 72nd minute.

Faced by a daunting 0-3 score at half-time, the Hammers dug deep and didn’t cave in as might have been expected.

In fact, they looked much better in the second half and despite Kane slamming the post on one occasion it were the visitors who found their first goal when Fabian Balbuena’s header from an Aaron Cresswell free-kick beat Hugo Lloris. 1-3 in the 82nd minute.

The hosts simply cracked after Davinson Sanchez’s header beyond his own goalkeeper from Vladimir Coufal’s cross gave the visitors their second. 2-3 in the 90th minute with 5 minutes of injury time to go.

A seemingly safe clearance off a free-kick in the 94th minute fell to substitute Manuel Lanzini who crashed a shot from long-range that hit the cross-bar and went in to leave a stunned Spurs still searching for a win at the Tottenham stadium this season.

Mourinho’s men who were looking to break into the Top four had to satisfied holding on to their 6th spot of last week with 8 points while their opponents have managed to worm their way into the Top half of the football league table to the 8th place and just a point behind at 7.