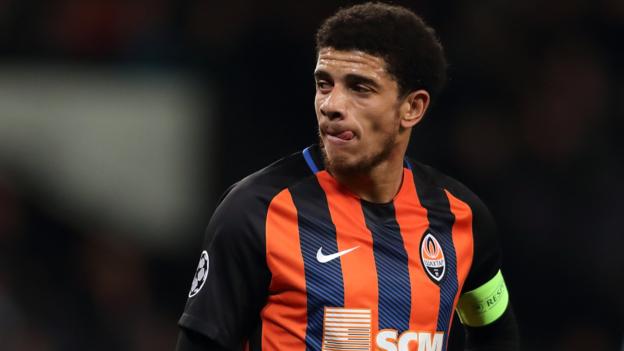 Shakhtar who were without ten of their first-teamers owing to injury and illness provided the first scare in the 15th minute when Marlos burst through into the area but failed to finish from an one-on-one with Real keeper Thibaut Courtois.

But the Belgian custodian could do little to prevent Mateus Tete from opening for the visitors with a low finish following a strong run from full-back Viktor Korniienko. 0-1 in the 29th minute.

Real conceded their second a little later in the 32nd minute when Courtois parred off a Tete attempt only for team-mate Raphel Varane to inadvertently turn the ball off the rebound into his own net.

Without the great Sergio Ramos at the back, out of action with a knee injury, Real’s defense looked completely hollow as they went in to let in their third of the night when Manor Solomon latched onto a Tete back-heel and easily beat Courtois who failed to track the Israeli forward’s run through the middle.

Going into interval down by a stunning 0-3, Zinedine Zidane introduced Karim Benzema at the break and tide seemed to have turned as Luka Modric quickly pulled one back for the hosts goal with a sensational right-footer that left Shakhtar keeper Anatolii Trubin grasping for thin air as the ball headed towards the top corner.

Substitute Vinicius Junior made an immediate impact on being introduced in the 59th minute and was on the scoresheet within an astonishing 15 seconds as he dispossessed Marlos at the edge of the area.

He beat Trubin with a low shot to the near post to make it 2-3 for Los Blancos and ignite hopes of a monumental fight-back.

But it was Shakhtar who threatened to add further to their lead as Courtois was forced to effect a crucial save off a Tete attempt before Marlos had a goal ruled out for offside.

Real probed desperately for an equalizer but Benzema was denied by a last-ditch block and Eder Militao fired his shot over.

Madrid thought they found the equalizer in stoppage-time after a Federico Valverde deflected shot rolled in, but a VAR review overturned the goal due to an offside Vinicius obscuring the goalkeeper Trubin’s view.

Shakhtar coach Luis Castro was asked in his pre-match news conference whether the game should be called off owing to the massive depletion in his team’s ranks but what a side with eight players under the age of 23 did in Madrid is now history.

Castro meanwhile described the numerous positive cases affecting his staff and squad as a “nightmare” but couldn’t be happier with his players football result and out-witting a powerful and illustrious opponent like Real Madrid.

Zidane rested a couple of big names against Shakhtar and started without Toni Kroos and attacking talisman Karim Benzema ahead of the Saturday’s La Liga clash with Barcelona but paid dearly for underestimating an under-strength Donetsk side.