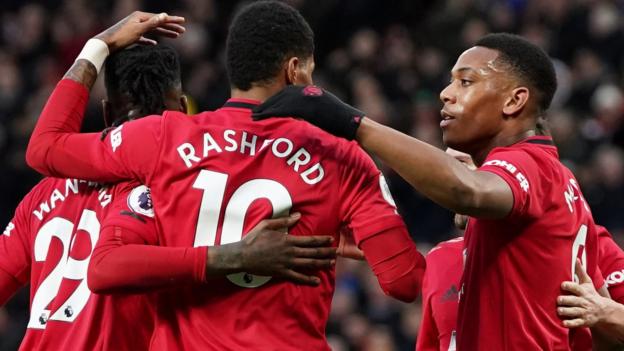 Marcus Rashford repeated his late heroics of 2018 with a superb winner to give United a perfect start to their European campaign.

Despite beginning the game well, it was David de Gea who was first put to test first as he palmed away an Angel Di Maria drive before denying Layvin Kurzawa from point-blank range.

Anthony Martial and Rashford in the role of the front two always looked like breaking down the PSG defense and it happened when the former drew a foul off Abdou Diallo inside the box with a deft change of pace.

A penalty ensued which Bruno Fernandes took. The Portuguese had his shot saved by Keylor Navas but VAR ordered a retake of the spot-kick as the PSG custodian was found straying off his line. Fernandes made no mistake this time around as he stroked his kick in for United’s opener in the 23rd minute.

Fernandes almost added one more in the 39th minute with a thumping right-footed effort but his goal-bound effort was somehow tipped around the post by Navas.

Although the hosts were well below their best, PSG and Kylian Mbappe looked threatening after half-time. Mbappe executed a  superb strike from the edge of the area but De Gea was equal to the challenge flying full-length to pull off a miraculous save.

Layvin Kurzawa then saw his cross clip the bar before the hosts earned themselves a lucky equalizer. A vicious corner whipped in by Neymar took Martial unawares as the Frenchman accidentally headed in past a helpless De Gea to make it 1-1 in the 55th.

Without Harry Maguire, both Aaron Wan-Bissaka and Axel Tuanzebe were excellent at the back thwarting whatever Neymar and Mbappe had to throw at them.

The 22-year-old Tuanzebe was especially brilliant as he kept stride with the mercurial Mbappe and made vital challenges in an impressive display that won him the Man of the Match status.

Despite a resurgent PSG post-interval, it were the visitors who were finding clear-cut chances to score on counter-attacks. Navas was forced to tip a Rashford shot wide but the English international had the last laugh as he beat the PSG goalie with a low, diagonal shot into the bottom corner from inside the area with only 3 minutes to go.

“We won against a fantastic team; last time was a knockout and the euphoria was different. This time there are no fans, it is sterile and no-one to celebrate with.”