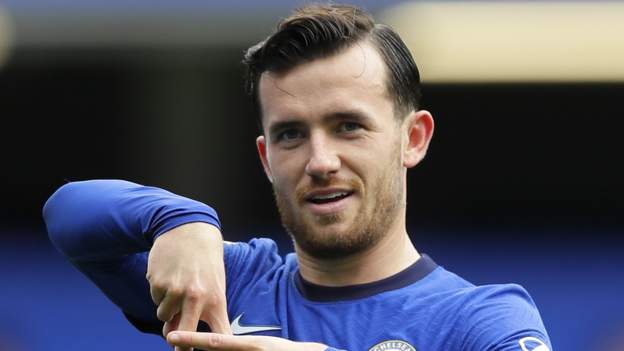 Chilwell shines on debut as Chelsea get four past Crystal Palace

Chelsea momentarily moved to the top four of the Premier League table as Crystal Palace succumbed to their second successive defeat at Stamford Bridge on Saturday.

Chelsea dominated possession in the first half and came close to scoring but were denied due some resolute defending by the Eagles with the score going at 0-0 into the break.

Ex-Leicester defender Ben Chilwell marked his 100th Premier League game and the second for his new club by firing in at the back post following Mamadou Sakho’s failed clearance.

Chilwell then delivered an excellent cross from the left to allow Kurt Zouma to double Chelsea’s lead in the 66th minute before Jorginho slotted two penalties (78 and 82) after Tammy Abraham was brought down by Tyrick Mitchell and Mamadou Sakho had tripped Kai Havertz.

Frank Lampard made six changes to the team that salvaged a 3-3 draw against West Bromwich Albion last weekend, among them being league debutants Chilwell and goalkeeper Edouard Mendy.

There was a rare moment of discontent among the hosts’ ranks as Tammy Abraham, who felt aggrieved at being denied the opportunity to take the second penalty by captain Cesar Azpilicueta who shepherded him away from Jorginho.

Commenting on the incident, Lampard said “I don’t mind Tammy’s exuberance but that has been dealt with by Azpilicueta and then me in the dressing room.”

Palace boss Roy Hodgson who went into the game with an unchanged line-up from defeat at Everton last weekend saw his side put up a listless performance at Stamford Bridge.

The normally prolific Wilfried Zaha and strike partner Jordan Ayew were starved of chances as their side spent long spells without the ball. The Eagles have rapidly dropped from the 5th place to 12th after the Chelsea loss.

Marcelo Bielsa Leeds came from behind to secure a thoroughly deserved 1-1 scoreline as they played out a thrilling draw with Manchester City at Elland Road.

Leeds came under serious pressure as a Man City eager to prove a point after their 2-5 humbling at the Etihad by Leicester, swarmed all over the hosts’ goal.

Leeds survived a very early scare in the 3rd minute when Kevin De Bruyne’s disguised free-kick crashed against the post, much to the surprise of goalkeeper Illan Meslier, and went out.

Guardiola playing Riyad Mahrez as a ‘false No 9′ with Raheem Sterling operating on the left was able to find openings in the Leeds defense at will.

The breakthrough finally came when Sterling cut inside, dodged past Liam Cooper and unleashed a shot to the bottom corner of the net in the 17th minute.

But Leeds as they have shown earlier are not a team to go down lamely and created chances before the half-time whistle.

Stuart Dallas forced a smart save from Ederson before a sloppy mistake from Benjamin Mendy allowed Luke Ayling a sight of goal, but Ederson was once more alert to make a vital stop.

Encouraged by those chances, Bielsa made a switch at the break as Ian Poveda replaced Ezgjan Alioski. Tyler Roberts was then replaced by £27m signing from Man City, Rodrigo, who made the best of on a poor error of judgment from Ederson to draw his side level in the 59th minute.

Kalvin Phillips’ set-piece effort was spilled over by the City goalkeeper after the ball ricocheted off Benjamin Mendy and Rodrigo was on hand to ease it over the line.

Rodrigo came close to a winner but his header from a Ayling cross went over the bar while Bamford had a great chance late on.

The result leaves Guardiola’s men 14th in the Premier League table, while Leeds sit fon 8th with seven points from their opening four games signaling a strong start to a season for a side that has returned to the Premier League after 16 years.

Toffees get four past Brighton; remain at the top

Two second-half goals from James Rodriguez helped Everton move to the top of the table as the Toffees thrashed Brighton 4-2 at Goodison Park.

The in-form Dominic Calvert-Lewin found the opener for the hosts in the 16th-minute lead as he rose high to head in to back post for his ninth goal of the season.

Yerry Mina headed in from a James Rodriquez free-kick in the first-half injury time to give Carlo Ancelotti’s side the lead going into the interval.

Rodriguez put the game beyond the reach of the Albion post the break, sliding in to finish off Alex Iwobi’s chipped cross at the back post in the 52nd and then making space inside the box to tap home from a Abdoulaye Doucoure pass in the 70th minute.

The visitors found a consolation goal through a fine Yves Bissouma strike in injury time but Graham Potter’s men have nothing to celebrate about as they blundered through their third loss of the season from their four Premier League outings.

Aside from Pickford’s patchy form between the posts, the only negative for coach Ancelotti was losing forward Richarlison to injury in the first half.

Results from other games on Saturday, October 3, 2020