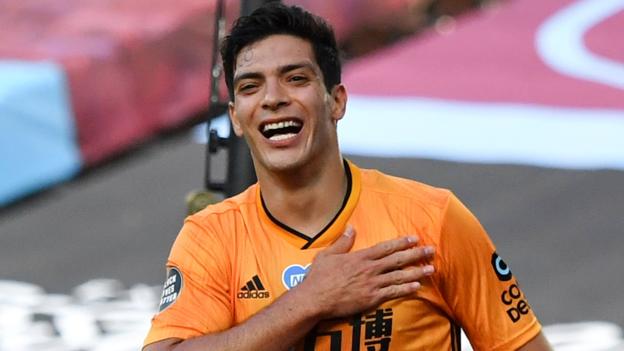 A goal from a deflected Raul Jimenez shot late in the second-half gave Wolverhampton their third win of the season and catapulted them to the sixth place on the Premier League points league table.

After losing their first two games of the season, Nuno Espirito Santo’s men have made things up by winning their past three fixtures and accruing 9 points in the process.

Leeds had more of the ball in the opening half and in their customary aggressive fashion fired crosses into the Wolves’ box from a variety of angles and threatened from set pieces but failed to create any meaningful opportunities.

In fact the best chance before interval came from the visitors’ way when Daniel Podence’s effort was saved by Leeds custodian Illan Meslier.

The Wolves improved markedly post the break with Romain Saiss’ powerful volley finding the back of the net in the 53rd minute.

However, the goal was ruled out by the VAR when Podence was adjudged offside in the build-up.

The visitors to Bramall lane took the lead as Jimenez drifted in from the right and cut back to shoot, the Mexican’s effort from the edge taking a wicked deflection off Kalvin Phillips and wrong-footing keeper Meslier to make it 1-0 in the 70th minute.

Pedro Hernandez missed a good opportunity to equalize as his attempt deflected over for a corner with Leeds pressing hard for a goal.

However, the Wolves defense held firm to hand Marcelo Bielsa’s men their first home defeat of the season.

The win puts Wolves sixth on nine points in the league table, equal to that of 4th placed Leicester City and 5th placed Arsenal but behind them by virtue of a goal difference. Newly-promoted Leeds are 10th with seven points after the home loss.