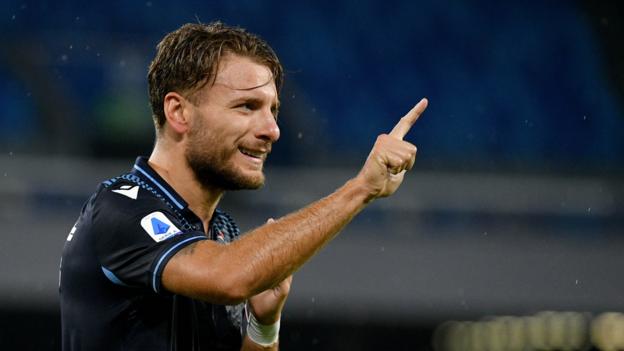 Ciro Immobile scored against his former club when he starred in Lazio’s Tuesday night win over Borussia Dortmund at the Olimpico stadium in Rome.

Immobile, who had 36 goals last season, a Serie A record in itself, opened the scoring for the hosts in as early as the 6th minute with a close-range left footed shot from a Joaquin Correa assist.

Lazio doubled the lead in the 23rd when Luiz Felipe’s glancing header steered towards the goal hitting Marwin Hitz’s face as it flew in. For inexplicable reasons, it was declared as an own goal when it should have been credited to Felipe.

Dortmund not able to make an impact in the first half with a couple of half-chances coming their way, were more assertive in the second with Erling Haaland looking dangerous, powering his way through the Lazio defense.

One such move in the 71st minute got the German outfit their first goal of the night when the lanky Norwegian forward took a ball from American teenage substitute Gio Reyna inside the area and blasted it to the roof of the net.

That was Haaland’s 11th goal in the competition so far from 9 appearances. With Lucian Favre’s men now in search of the equalizer, they fell to a Lazio counter-attack when a Ciro Immobile pass found Jean-Daniel Akpa Akpro who shot in with a left-footed effort to seal it for the hosts in the 76th minute.

Borussia Dortmund now have lost 10 of their last 14 Champions League fixtures on the road and have just four wins from 17 games in Italy.

Lazio’s good beginning to their European campaign came in contrast to their domestic form where they have collected just 4 points from last four Serie A outings – winning one and losing two.

It’s been a long wait for the Rome-based club since they last beat Werder Bremen at home 12 years ago in November 2007.