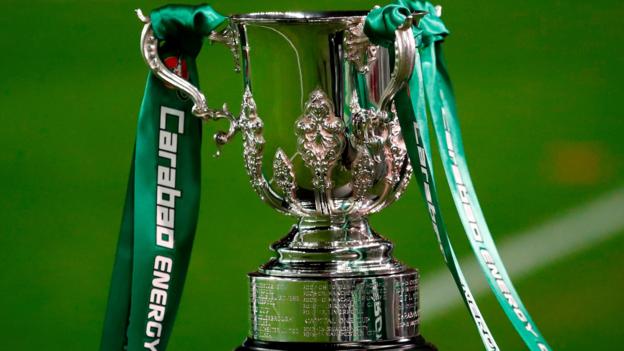 Arsenal defeated Liverpool on penalties in a EFL Carabao Cup clash at Anfield to progress to the quarter-finals after the stipulated 90 minutes of playing time ended in a goalless draw.

Mikel Arteta’s Gunners who had lost 3-1 in the Premier League to the champions 4 days ago, defended stoutly against a dominant Liverpool to weather out the hour-and-a-half’s of normal time.

Arsenal were organized and disciplined in defense. Despite Mohamed Salah being joined in the attack by Takui Minamino and Diogo Jota and making up an experienced frontline for the Reds, a breakthrough seemed hard to come by.

Minamino missed a golden opportunity for Liverpool seconds before the half-time whistle when he struck the bar despite a gaping goal in front of him.

The Reds came even stronger after the break with Virgil van Dijk and Marko Grujic coming close but some excellent work from Arsenal keeper Bernd Leno prevented the two from getting on the scoresheet.

Van Dijk’s deft stab at Grujic’s header from a corner was brilliantly saved and a looping header from the Serbian midfielder from a set play was efficiently dealt with by the Arsenal custodian.

The Gunners tried their hit-on-the-breaks strategy but opportunities were hard to come by. Rob Holding’s header off an excellent Nicolas Pepe delivery was one, but it failed to test Liverpool goalie Adrian.

Eddie Nketiah squandered a chance when he was presented with a ball laid on by Joe Willock, but Adrian took full advantage of the former’s hesitancy to push it wide before he could be tested.

Liverpool kept hunting for a winner as Diogo Jota brilliantly controlled an excellent pass from midfield, jinked past Sead Kolasinac before blasting his shot straight at Leno. That was the last effort by any side as the game went into penalties.

Liverpool were the first to score in the shoot-out when Adrian kept out Mohamed Elneny’s poorly taken spot-kick, before substitute David Origi missed in similar fashion for the hosts.

But the next 8 penalties were on target before Leno brought off a fine save from Harry Wilson’s effort.

Willock’s deciding spot-kick snucked under Adrian to propel Arsenal into the last eight and set up a quarter-final clash with Manchester City in December.

Man of the match: Bernd Leno