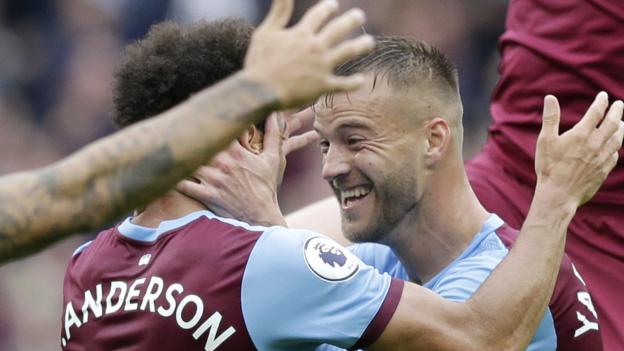 Welcome to the West Ham top scorers list of all time. We have a look at the most prolific scorers during the Hammers teams history.

In West Ham United’s 124-year history, some of the most prolific West Ham top scorers came not very long after its inception in 1895.

The biggest of them all and towering above everyone else was Vic Watson.

In his career spanning for 1920 to 1926 Watson featured in 505 games for the Hammers in which he scored an astonishing 326 goals that included 13 hat-tricks.

298 of those goals came from League games and the remaining 28 in FA Cups.

Next in line among West Ham top scorers is probably their most famous – Sir Geoff Hurst, MBE.

In his 500 games for the East London club across all forms of competition, Hurst recorded 242 goals. More notably, the Lancashire footballer was not just part of the England team that won the 1966 World Cup but was also a goal scorer in the final game against Germany which the Three Lions won 4-2.

In fact, Hurst with his three goals in that memorable game scored a hat-trick and still remains the only man to do so in a World Cup final.

None have come close to the prolific Watson or Hurst with the third-highest scorers John Dick and Jimmy Ruffell long way below with 166 goals.

Among the contemporary lot is Mark Noble who is still around after an astonishing count of 472 games for the Hammers, a near-record in itself for the side.

Since the time of his advent into the East London club in 2004-05 at the age of 17, Noble has featured in 16 seasons straight, where he has managed to rack up as many as 57 goals.

Carlton Cole scored 68 goals from his 293 appearances and ranks at No 16 in the West Ham Top Goal Scorers table.

It would be a shame not to mention Paolo Di Canio, the Italian-born forward who was associated with clubs ranging from Juventus, Inter Milan, Napoli to Lazio but spent the most productive years of 21-year career with the Hammers.

Trevor Sinclair was another who spent six seasons with the Hammers spanning years from 1997 to 2003 and notching up 38 goals from the 206 games he played for the club before venturing out to Manchester City.

Andy Carroll is also among the more notable names of West Ham greats, spending seven seasons with the Hammers and getting 34 goals from his 142 appearances between 2012 and 2019 before moving out to rejoin his old club Newcastle in August this year.

Chelsea legend and current coach is one who started and spent the earlier years of his career (1995-2001) with West Ham, featuring in as many as 187 games for the club and notching up an impressive tally of 39 goals.

The following is a list of 30 top goal scorers for West Ham United till date.