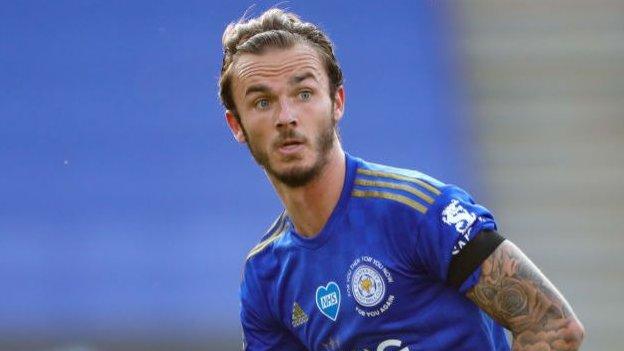 Second half goals from James Maddison and Youri Tielemans helped Brendan Rodgers’ Leicester City register their seventh away win as they moved to the third place of the Premier league table with 32 points from 17 games.

Odds are subject to change and quoted from the leading online betting sites.

Vardy and Tielemans returned to the Foxes’ starting line-up that was further boosted by the returns of Maddison and Timothy Castagne from injury. The visitors to Newcastle started in confident fashion with Jamie Varfdy getting the ball into the net in the 13th minute only to be ruled offside by the VAR.

The Foxes carved out a half-chance after some neat play between Maddison, Harvey Barnes and Timothy Castagne, but the latter’s cross hit Barnes in the face before going wide. Maddison’s curling effort was off the mark and this was before Vardy and Tielemans missed chances to score as the first half ended on a lackluster note.

Not since September 2018 had St James’ Park witnessed fewer shots in the first half of a Premier League match.

The post-interval phase was livelier as Vardy flashed his attempt from a Castagne ball over the top early in the second half. Newcastle had their best chance when Fabian Schar’s lovely floating pass found Matt Ritchie on the left who essayed a searching cross in. Jonny Evans was at hand for Leicester as he intervened  just ahead of Callum Wilson to see the ball safely away.

Barnes then played down the left to Vardy who neatly skipped past center-back Federico Fernandez before pulling back the ball to Maddison at the edge of the box. The Leicester midfielder took Vary’s pass before thundering in his shot part Karl Darlow to give his side’s opener in the 55th minute.

The introduction of Jacob Murphy in the 65th minute spruced things up for Newcastle as the hosts showed some fine attacking play but it was Leicester who doubled their advantage in the 72nd through Tielemans.

The move started and finished with Tielemans as the Dutchman got at the end of a Marc Albrighton cross to whip the ball in just from the fringe of the penalty area. Vardy could have made it three a little later but his effort rattled the crossbar while also being flagged again for offside.

Steve Bruce then sent in Andy Carroll on 79 minutes and the forward responded immediately as he took in a rebound from a Ritchie free-kick, crashing his volley past Kasper Schmeichel to reduce the deficit in the 82nd.

The Magpies surged ahead looking for the equalizer and could have found it but Wilson fired his effort straight at Schmeichel from close range as Leicester held on till the end.

The Carroll goal was Newcastle’s first in four games and the long absence of the mercurial Allan Saint-Maximin continues to have an impact on the Magpies’ attack as Callum Wilson remains a lone figure up front.

Steve Bruce’s men who have held sides like Liverpool, Tottenham and Everton have struggled to find wins as they find themselves in the middle of the bottom half of the League Table on the 15th spot.

Man of the match: Youri Tielemans.